While in Magnimar with an Inquisitorial team Royston Raven found herself in search of the young acolyte Angyal Kosfogo.

They found her in a the Calistrian temple “Tea and Tattoos”. She suddenly ran of exclaiming that the “coin had fallen into the wrong hands!”

They found the coin after fighting a Succubus and a friend that was turned against them.

The artifact’s powers are not known but the coin seems to have been given to Royston by Calistria.

It has the image of Calistria on one side and a male face on the other that is very similiar in appearance. 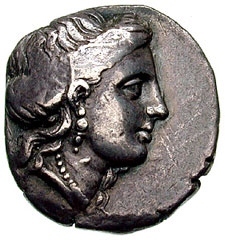