A swash-buckling, gregarious, skirt-chasing, drinking, gunslinger of great skill. Though he is often seen as the comic relief, he is also extremely dedicated and loyal toward his friends. Those who would mistake his light nature with weakness soon find out otherwise.

He has great skill with his many pistols and rapier he names “Joyeuse”. His 4 masterwork pistols are named “Ivre”, “la femme”, “Dormeur”, and “Chanteur”.

Brys is a recurring NPC who has been in the pregames of Rikker, Royston, Tonii and Darius. 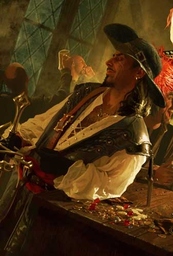